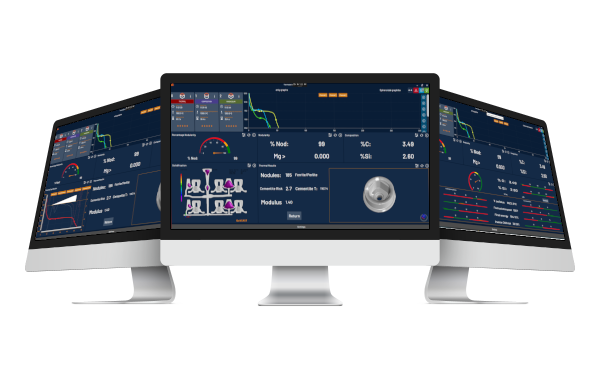 This article is structured in three main aspects:

A common problem in casting is that with the same or very similar chemical composition, different results can be obtained in terms of rejecting parts. The appearance of metallurgical defects such as microshrinkage, carbide precipitation and / or graphite malformations can be a consequence of different metallurgical qualities. Thermal analysis can be used as a metallurgical control system for the process. This is how the Thermolan® system was born, originally developed by the AZTERLAN Metallurgical Research Center, responding to the need to define metallurgical quality based on the different characteristic points of the cooling curve.

Taking into account additionally the cooling rates and energy released in the solid liquid transformation process, which in the case of cast iron allows to know, amog other characteristics, the amount of graphite and austenite formed at each instant of solidification. This singular fact allows calculating and quantifying the amount of microshrinkage that can be obtained during the solidification of the material.

The first practical application of thermal analysis is to obtain the carbon content for all foundry types. That way, one of the most important elements of iron castings can be controlled quickly and reliably.

For gray cast iron, the Thermolan system predicts the metallurgical quality by measuring the % of type A graphite , its size, the K parameter representing the risk of contraction defects. Additionally also the prediction of the microstructure and mechanical properties.

For compact graphite cast iron, a specific technique has been developed to predict the spheroidization index.

Thermolan® develops its latest advances towards in part prediction. Applying the cooling curve to a specific part, introducing into the system the thermal modules of its different critical areas, provides results extrapolated to those areas.